First of all, a French translation of the rules is now available. You can download it from Board Game Geek, but also from Ludism.

Errata: I've discovered a small missing detail in the English rules. In the first game turn, novices must also roll the die for noises, even though the guards have not moved yet. In this way, guards can detect novices which remained too close to the abbess' cell.

Here are some tactical hints for the guard player :

You need a keen plan to trap the novices in order to catch them easily. First, check were the keys are. Most of them are in the gardens and the chapel. So, there is a big chance that most of the novices will run in that direction at the start of the game. No need to run behind them. Their advance is too big and you will arrive too late. So, you will try to shortcut their plans and run towards the Pharmacy and the Scriptorium. If by chance a novice needs key 7 or 8, he will be surely trapped and caught.
When you arrive at your destination, you are sure that all the undetected novices are in the chapel or gardens. So, now you select paths to cross the whole convent from right to left. When you reach the garden's gate, you will have caught a lot of novices, because most of them will have few escape options.
The game is now halfway and if any novice was still uncaught and undetected at this moment, you must head towards the abbess'cell to block all novices on the way back.
Victory will be yours!

Here are some tactical hints for the novice player :

The guard player thinks that you are stupid, but he is terribly wrong. Instead of moving his guards in opposite directions, he kept them together, leaving a large part of the convent unsearched.
So, at the start of the game he went in the wrong direction. Now you have plenty of time to pick up your key in the gardens or in the chapel. If your key is at the opposite side of the convent, you just need to wait until the guards are gone and you walk quietly behind them, picking up the key without any problem. Then, you go towards the garden's gate and back to your cell, still behind the guards. You win without any problem.
When you are in the chapel or in the gardens while the guards are coming in your direction, take the path outside the convent to pass the guards safely and to reach the kitchen. From there on, you can reach easily your destination and run back towards your cell.
Normally, you should arrive there before the guards. If not, you wait until they move away (without having any idea where you could be) and sneak quickly back in your cell.
It is that easy!
1 comment:

Saturday April 3th, I've participated together with my sun at the poker tournament in Middelkerke. 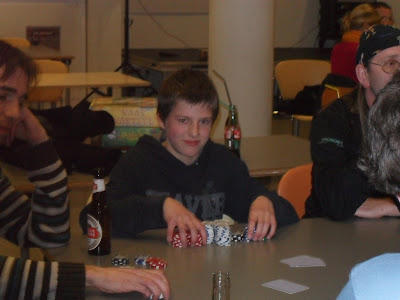 Alexander, the youngest player, became 20th on 65 participants. He lost with a straight against a higher one. 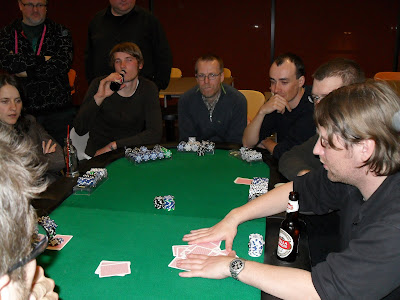 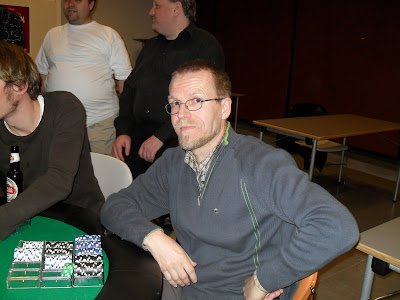 My stack of chips is increasing together with my confidence. 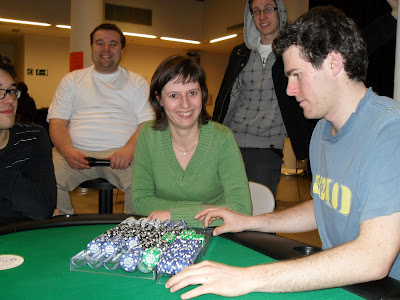 The winner of the tournament. She won with a full house of kings and sixs, while I stalled with sixs and kings at the river. Damned!
No comments: