Saboteur is still a hit 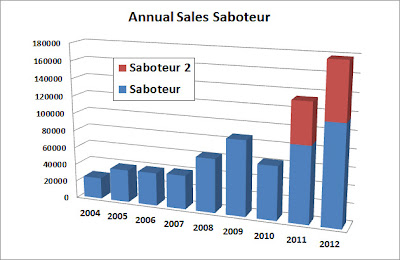 My most successful game is still selling very well. In fact, as you can see on the graph, it sells even better and better. For a game, which is on the market since 9 years already, I think that this is an excellent result.
In 2012 almost 170000 copies of both game versions were sold, which is more than the total sales of the first 4 years.
The total amount of sold boxes is about of 660 000 samples.

Saboteur is the basic game. Saboteur 2 is either the pure expansion or the big box containing the basic game and the expansion. Both versions sell very well as you can see. The release of Saboteur 2 has clearly boosted the world-wide sales numbers.

Let's hope that the German publisher Amigo Spiele will now be convinced to release the expansion on the German market.

For newbie game designers, who might start dreaming, I want to inform them that these figures are really exceptional. The average sales numbers for games are between 3000 and 5000 copies. Mostly, the first print-run is also the last one.

Above this, sales numbers doesn't tell anything about how good your game is.  Good games doesn't sell necessarily well, while bad games doesn't sell necessarily bad. Good sales numbers just mean that people like to buy your game for one or another reason. Do not interprete this comment as if I don't like my own game. I just want to avoid that you, as a designer, get frustrated that your brilliant game concept is a commercial disaster. Success depends sometimes more from luck than pure talent.
2 comments: