There is a small printing error in the rulebook. The right illustration should be this one.
The rule mentions that you must note the turn number on EACH zone that you move through.

This is especially important when searching zones. You may only search zones that you have passed. 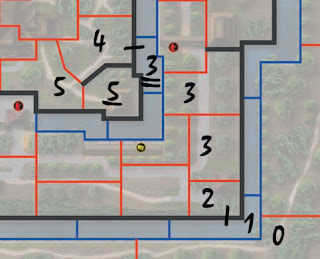 Back from Spiel in Essen

Each year I go to Essen to meet the publishers. This year was particularly hectic as I had no time to look at other games which were presented. I've read that there were about 750 new games. This means that you must play each day 2 new games in order to know all the new games of the year!

So, let's limit my comments to my own games.
On the fair 2 new games were released and I was very proud with the presentation of it. Amigo Spiele (with the biggest booth on the fair) opened no less than 14 boxes to allow playing "Die Brücke am Rio d'Oro" simultaneously on their numerous playing tables. Above this, they reproduced the bridge to allow playing the game "live".

The other new game was "Ninja" which was presented on the AEG booth. On Saturday afternoon, when I left the fair, only one copy of the game remained. The rest was sold out. The game was already showed in the US on Gencon (in August- and there were a lot of positive comments to read on Board Game Geek. So, I suppose that the game was a little bit expected by the European players who rushed to buy their copy, as they have no patience to wait upon a European release in their own language.

About my contacts with publishers, I can announce that there is now a Korean version of Saboteur. A Finnish version is in preparation. The extension will also become available for the German market.  Besides, I signed 2 new license agreements on the fair and I have a good hope that a few other agreements will be concluded after the fair.

So, was the fair succesful for me? Yes, it was very successful.
1 comment:

You can download the Dutch rules for "Die Brücke am Rio d'Oro" via this link . 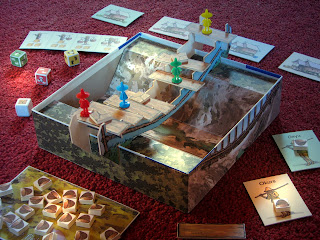 Here you see the original prototype. Notice that the game has been rethemed from Chinese rice farmers to adventurers in South America.
No comments: