If you don't like the game, you can still have fun with the buckles. 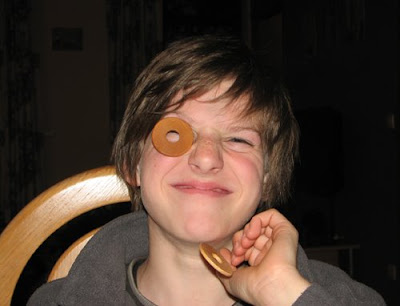 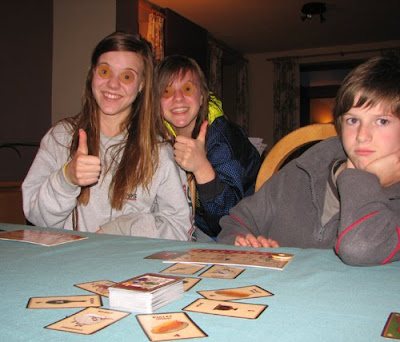 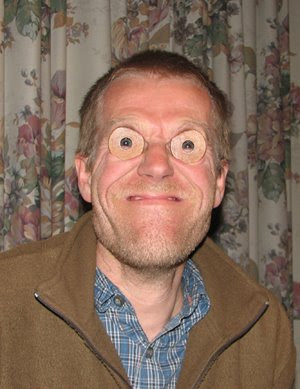 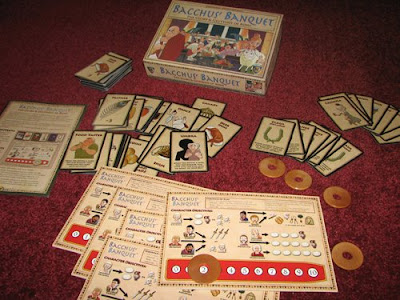 Here, you have a nice picture showing all components of the game : 110 Cards, 5 Displays, 5 Belt buckles and a Rulebook.

Many people wonder how a game is designed.
Do you wake up in the morning with a brilliant idea? If yes, how long do you have to sleep? What is the best drink when going to bed : beer, wine, whisky or a mix of the three? Is Belgian beer the best and how strong must it be? Can you have sex when you plan to design your game during the night?
For the first time, I will lift up a tip of the veil (because I know that you are curious) and use the designing of Bacchus' Banquet as an example.
It all started several years ago, when I saw the French cultmovie "La Grande Bouffe" (with Marcello Mastroianni, Michel Piccoli, Philippe Noiret and Andréa Ferréol, first released in 1973) again. The film goes about 4 friends who gather together in a villa to eat until death (and make love between 2 dishes, notably on the table with the dessert in the form of 2 gigantic boobs).
I liked the movie and found it a great topic to make a game about it.
The Roman era with their eating and drinking orgies could fit as a perfect decor for this game. So, I naturally looked with interest towards the emperor Caligula, known as one of the most decadent Roman caesars.
After reading a book about his short reign (he was emperor during only 3 years before being assassinated), I was convinced that all the ingredients for a great game were present.
The game would be constructed around a dinner where dishes are served, presents distributed (a Roman custom) and where the eating would be cheered up with dances and bill &coo.
As Caligula died stabbed by conspirators, I wanted to include this idea in the game. Therefore, it would be necessary that players would participate at the dinner as guests with secret roles (this reminds at "Saboteur", isn't it?).
Here a first problem emerged : if any character is secret, how can the conspirators know which player controls Caligula that they need to kill? What if Caligula is not present among the players?
The solution was obvious : Caligula must be an open character and need to be present in each game.
The drawback was that with an open character, Caligula would be weaker than the other hidden characters. Therefore, he had to be stronger and I introduced the concept of privileges to solve it (in the first versions, only Caligula used privilege cards).

At this point, I had a theme, different characters and objectives, but still not a game mechanic.
Maybe players could pass secret dishes to each other. Either you accept a dish and apply the effect, either you pass the dish to someone else. Passing dishes would work best as passing a card, so I focused know on designing a card game.
How passing secretly a card to other players? If it is just randomised (a card drawn from a stack), it is simply a gamble without a particular interest. Therefore, the other players need to evaluate their

chances when a card is offered to them. If two cards are selected, you have one chance on two, to make the right guess. So, this is not particular exciting. What if three cards out of a limited number of cards are selected, showed to anybody and then one of them would be passed? This could work, but what to do with the other 2 cards? Discard or discard one and keeping the other? Yes, that's a nice idea. In this way, it makes sense what you select as cards and what you are prepared to give away.
When eating dishes it is normal that you become

saturated after a while. Therefore, I needed some easy way to visualize your saturation level. What is more natural than adjusting the buckle of your belt when eating more and more? So, the idea of using a buckle and a belt forces itself upon me.
Besides, it would add a nice visual element to the game (my kids still speak about the game with the belt).
At this point, the development of the game went quick. I made different cards, some belts and buckles and was soon ready for the first play test.
Playtesting is a little bit trial and error. You try a set of rules, adjust a few rules, try again, add a few cards, try again, change an objective, try again and so on. Needless to say that the feedback during playtests is crucial. Kids are very spontaneous, but can not really tell what goes wrong in the game mechanic. Experienced players give you usefull new ideas to improve your game system.

To win the game, you must use all your cunning.

One of the key elements in the game is to take the initiative at the right moment. Mostly, this means taking risks.
However, sometimes risks are low, especially when the 3 selected cards offer no particular risk for you.

Example : If the pick is a lobster, a carp and a present, you may normally accept any gift card without hesitating.
At other moments, risks are high and can better be avoided.

Example : If the pick is a piglet, a poison and an umbra, you have a pretty chance that you will get a gift that you don't like.

Observing which cards opponents select and keep for themselves, gives you valuable clues on which goals your opponents have.
Example : If someone keeps a present, he might be particularly interested in presents. If someone gives a dagger away, he might be a conspirator.
Once you have an idea who has which objective, you have extra trumps to hinder your opponents.

Example : You can discard a present or a dagger to avoid that your opponents get those cards.
Sometimes, you might be forced to help an opponent.
Example : If there are 2 accepted daggers and you are not a conspirator, you must help Caligula by discarding a dagger which becomes available. Otherwise, you risk losing the game in favor of the conspirators.
No comments:

First review on the net

I found a first review about Bacchus' Banquet on the internet and as it is the type of review that I like to read ("clever game", "enjoyable", "highest recommandation", "a terrific and original filler"), I want to give you the opportunity to read the full text.

For a good understanding : It is not my mother, nor my brother nor my kid who wrote the text. In fact, I do not know the person who wrote the review at all. But if I would have the chance to get knowing him, I'm sure that he will become my friend.
No comments:

At the start of the game, Caligula gets 2 secret Privilege cards, while the other players get one card. A privilege acts like a joker and allows a twist in the distribution of cards. 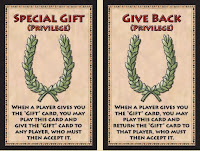 With the Special gift card, you can force a player to accept the Gift card.

With the Give back card, you force a player to accept the Gift card that he wants to give away. 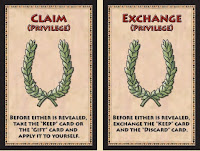 With the Claim card, you can claim one card, i.e. keep or gift the gift card.

With the Exchange card, you can exchange 2 cards, i.e. keep with discard card.

When you use your privilege card, you must discard it.
Therefore, keeping your privilege as long as possible, can be a wise tactical option. The threat of playing a privilege is sometimes more powerful than using it.
No comments: