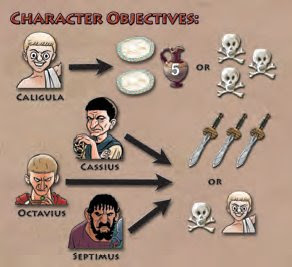 The emperor Caligula has the choice between 2 objectives : one is to eat 2 dishes and drink a total of 5 Wine points. The other is to put 3 characters out of play.

A character is out of play when the buckle must be moved beyond hole 10 of its belt. This happens when the character has accepted too much food, wine or poison. Luckly, the player himself is not out of the game. He simply gets a new character.

For this reason, there are 9 characters (for a maximum of 5 players). However, to avoid an endless game, only 2 players may get a new character. A third dead character means a victory for Caligula.

The conspirators win by killing Caligula or when 3 daggers have been accepted by any character (3 daggers are visible next to the displays). Thus, when Caligula plays the game safely and avoids any dangerous card, he can still lose the game when there are too many daggers in play.
No comments:

As the careful reader of this blog (no not you, pal) has already deducted, each character has his own objective. Some want to eat and/or drink, some want only presents and some want to kill Caligula.

Each player gets a display with an overview of all characters' objectives. 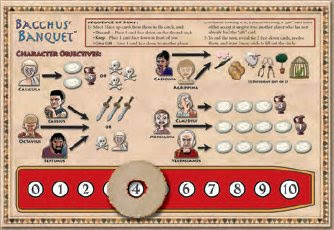 At the start of the game, each player gets also one secret character card. Only the player who gets the card of Caligula must reveal his card and keep it face-up.

Why?
Because if nobody knows who is the emperor, how do the conspirators know which player they must target?

Allright, you could have imagined it yourself. You are far more clever as you looks.

All accepted cards are placed face-up next to your display. In this way, you can start guessing which player has which objective.

Example : Nero has accepted 2 presents already. Maybe he might be Agrippina or Caesonia.

The 3 cards that a player selects to discard, keep and give away, gives also clues who might be who.

Example : Julia has offered a dagger as a gift. She could be one of the conspirators.

Of course, deception is always possible and experienced players must be observed with consideration.
No comments: 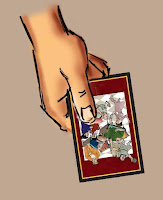 When a card is offered as a gift, you may accept or refuse the card.

If you accept it, you reveal the card and adjust your buckle the right number of spaces as indicated by the card. Besides, you get the initiative for the next turn.

If you refuse it, you pass the card to another player who has not been offered the gift yet.

Now comes the tricky rule : If all players refuse the card, the card returns to the first player who as offered the card. 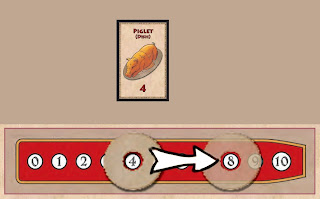 Example : A player offers you the gift card. Can you thrust him? What could be the gift card : the poison, the piglet or the feather? Your buckle is at hole 4, so your character is out of play when accepting the poison. You can safely accept the piglet or the feather. You take the risk and accepts the card, which appears to be the piglet. Now, you move your buckle 4 spaces to the right. You have the initiative for the next turn.
No comments:

How does the game works?

In the middle of the table we place a stack of Action cards. Then, we draw 7 cards from the top of the stack and display them in a circle around the stack. 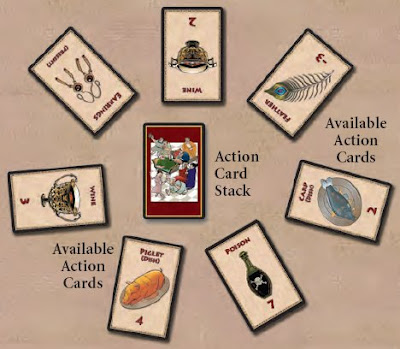 The player with the initiative selects 3 cards out of the 7. 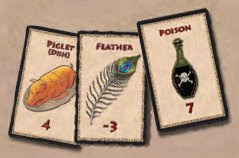 Example : You select the piglet, the feather and the poison.

You keep one card for your own. You discard one card and give the last card away to another player. For the moment, all cards remain facedown and secret for the other players.

These 3 cards trigger a special effect when activated.

The umbra is a non-official guest, standing behind the official guests, who eats the remains of the dishes. In the game, he allows you to discard any dish that you do not want to eat.

To protect himself, the emperor used a taster. In the game, he allows you to discard any card that you do not want to accept.

Before drinking wine, it was common to sing a hymn to bacchus (the god of wine). In the game, you can force other players to adjust their belt with one point when you accept a wine card.

What can we do in-between two dishes?

The negative values indicate that you may losen your belt with the same value.

Note : Dozing is excellent for the digestion. Unfortunately, you lose your next turn.
No comments:

As usual, Caligula offers not only food and wine, but also some particular presents.

Note that the sheep can bleat and speak : "Shut up, silly bird".
No comments:

Which dishes will be served at the banquet?

The two main dishes are fillers. Watch out for the poison!
For the thirsty people, there is also a lot of wine.

Which are the characters who participate at the decadent feast?

Caligula, the young emperor, who took the power after the dead of his uncle Tiberius. His taste for fine wine and chicks (both animal and human) is well-known.

Agrippina, sister of Caligula. Despite her fragile look, she caught the attention of Caligula. Brother and sister, that's a dangerous mix. A few presents will make her compliant.

Caesonia, the 4th wife of Caligula. She was a notorious courtisane in a former life. She needs presents to shut her mouth and eyes.

Claudius, the uncle of Caligula, will succeed Caligula on the throne after his death. For the moment, his interest is limited to filling his mouth.

Messalina, the wife of Claudius, has a lawless reputation. Eating and drinking are her main interest for this evening.

Vespasianus is the glutton of the guests. His appetite is legendary as the cleansing is on the day after.

These 3 fellows are the conspirators. They are waiting upon the right moment to stab their dagger in the back of the emperor.
No comments: 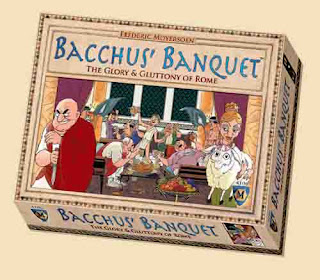 In April Mayfair Games will release a new game, named Bacchus' banquet.
What is it about?

However, when you arrive at the villa, you only notice the scum of Rome as dining guests. Probably one of the crazy jokes of the Emperor himself. By inviting only the most disgusting people, he clearly indicates what he is thinking about you.
Enough is enough. Time for revenge.

From now on, you will participate at the dinner with a hidden agenda (and a dagger in your toga)...

This is your belt.
The most important rule in the game is that when you are eating dishes, you move the buckle as many spaces as the value of the dish.

Example : when you eat this delicious piglet, move your buckle 4 spaces to the right.

Keep care not to pass beyond n°10. You do not want me to explain what will happen then...
No comments: