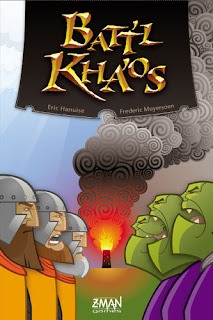 Z-man Games, an American publisher, has released Batt'l Kha'os, a new game which I've co-developped with Eric Hanuise.
The game is an abstract duel with square tiles containing knights and orcs. The objective is to control towers by gaining the majority of the corners.
Check the website of Z-man Games for the full rules or Boardgame geek for a translation.
Designed as a 2 player game, it is nevertheless quite easy to play it with more players.
Here are the special rules to adapt the game for 4 players :

With 3 players, the special rules are quite similar.