There are 5 characters in the game: Dracula and the 4 hunters : Van Helsing, Mina Murray, Jonathan Harker and Lord Godalming.

Each character has one sheet. On this sheet, you see a row with Blood points and a row for objects (bats for Dracula). The Blood points indicate your life points, your action points and the number of objects that you may carry. 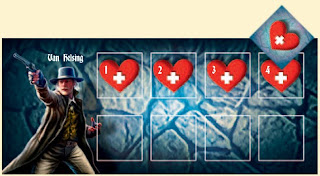 At the start of the game, each character starts at the maximum number of Blood points, which is 4 for the hunters and 5 for Dracula.
This is indicated by placing a Blood marker as a diamond on top of the right square.

The hunters get 6 initial objects to divide: a crucifix, a dagger, a pistol,a lamp, an antidote and a first aid kit.

The first problem emerges: who gets which object(s)? The hunters must find an agreement. The objects are placed facedown on the character sheet. Dracula does not need to know who is carrying which object.

The small number on some objects indicate the chance that using the object succeeds. The higher the number the more chance on success.
The asterix indicates that the object can only be used once. After use, you must discard the object.

Soon : the castle and its 3 levels.
No comments:

Here is the trailer for the new game.

I hope you like it as much as we had fun to make it.

The game will be released in the first week of october (in Europe).
1 comment:

Where are these people going to? 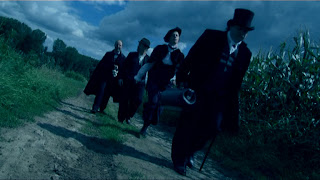 What will Lord Godalming chose? 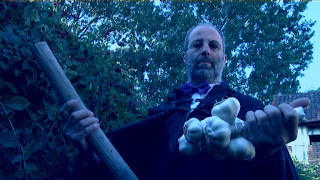 Where is Mina so scared about? 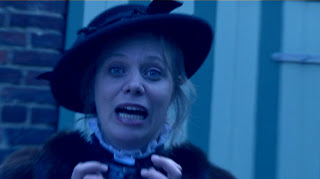 Why is Jonathan Harker holding a rifle? 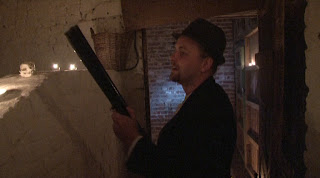 What is this stake for? 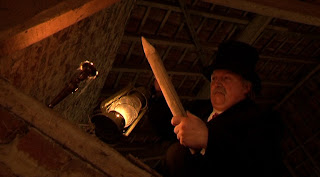 So many questions...
Soon, you will know the answers by looking at the trailer or by playing the game "Van Helsing"!
1 comment: